The origin of the name, America, is widely regarded as a reference to Amerigo Vespucci; the Italian explorer that made the claim that the continent of America was a ‘new world’, and that there is a second ocean beyond that land. His claim contradicts that of Columbus, who went to his grave believing that he had found the shores of Asia. The evidence for this claim is based in a 1507 map by Martin Waldseemuller which was lost to history until its only remaining copy was discovered in the library of a German castle in 1901. 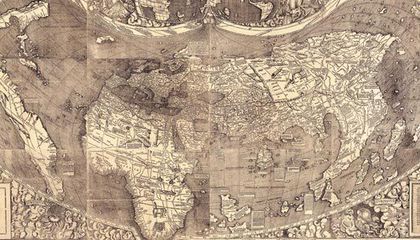 The Waldseemuller Map, on display at The Library of Congress 8ft x 4.5ft

The map is printed on 12 sheets, using the woodcut process, printed by a small group of humanists and printers known as the Gymnasium Vosagense, lead by Martin Waldseemuller and Matthias Ringmann. The original woodcut blocks and 999 other copies of the map that are believed to have been printed have been destroyed or lost to time.

Vespucii, following in the footsteps of his friend Columbus, found himself on the coast of Brazil during voyages between 1497 and 1504. He returned to the old world, became a Spanish citizen and died in 1512. There is no recorded evidence that Vespucii ever met or communicated with Waldsemuller, or that he ever lobbied for the continent to be named after him. However, it was the included, in the book Cosmographiae Introducto, that accompanied the discovery of the map explained their reasoning for naming the new world America after Vespucci;

The Naming of America: Fragments We’ve Shored Against Ourselves by Johnathan Cohen https://www.jonathancohenweb.com/america.html 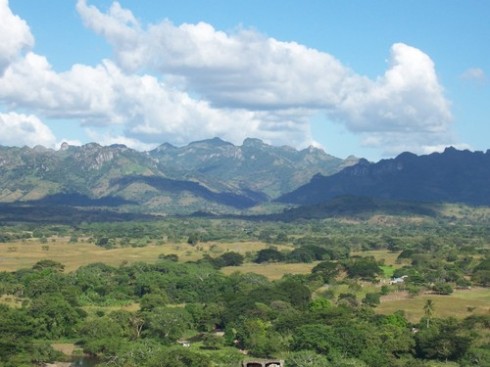 Pictured above is a section of the Amerrique Mountains located in what we today call Nicaragua facing the Caribbean Sea. It is believed that both Columbus and Vespucci made contact with the Mosquito Indians who were, and still are, native to that area. It could be possible that Columbus and his crew first heard this name, and as language does, it found its way back to ‘the old world’ as a alternative name for the new world. Waldseemuller, hearing this strange word through an extensive game of telephone, decided that it had to be referring to Vespucci. This, of course, is a claim that cannot be proved, but it might explain why Waldseemuller used the feminine version of Vespucci’s first name instead of his last name, which was customary at the time.

Regardless of its origin, America’s name was solidified in 1538 when our good frenemy Gerard Mercator released his global projection of the world. He never wrote a justification about the name of the new world, and it is not known if the Waldseemuller map made an impact on his decision, but it is likely that he was aware of its existence.

The Waldseemuller Map is an incredible historic document, whose own history is contentions, but by all documents and historical accounts, it is the birth certificate of America. What do you think? Leave your comments below.